Western North Dakota contains several areas of known radioactive mineral deposits. Investigations done from the late 1940s to the late 1970s discovered several large areas of increased radioactivity in Bowman, Slope, Stark, Billings, and Golden Valley counties. Uranium and other radioactive elements were often found associated with beds of lignite. These low grade ore deposits often ranged from 0.005 to 0.2 percent uranium. It is theorized by many geologists that these radioactive elements were released during the alteration of volcanic glass. These radioactive elements were then leached by groundwater into the underlying rocks until a change in pH and or Eh caused them to precipitate, often in a coal or organic-rich lenses in sandstone. Early on it was noted that radioactive lignites often were overlain by sandstones.

Beginning in 1956, a few hundred tons of uraniferous lignite was shipped from North Dakota to processing plants. The mills were set up to process uraniferous sandstones and had difficulty processing the low grade ore lignites. Beginning in 1962, this problem was rectified by burning the uraniferous lignite in pits at the mine site, often by burning the bed in place after the overburden had been removed. The process reportedly took from 30 to 60 days and diesel fuel and old tires were often mixed with the lignite to assure that it would burn sufficiently. The ash from the mines was then sent to Belfield or Griffith where it was further reduced by burning in kilns. The resulting ash was then shipped to mills in South Dakota, Colorado, and New Mexico. At least seven, and possibly as many as fourteen uraniferous lignite mines operated in the state. Records were poorly kept for a number of reasons including national security and most were relatively small short lived operations. Mining was discontinued in 1967 after total production of approximately 85,000 tons of ore resulting in 270 tons of "yellow cake" (U3O8). Renewed interest in uranium in the mid 1970s resulted in a number of uranium investigations centered in the Chalky Buttes (Slope County) and Gascoyne (Bowman County) areas. The accident at the Three Mile Island nuclear plant in 1979 effectively halted all uranium exploration in the United States. It has been estimated that North Dakota contains a mineable reserve of 480,000 pounds of U3O8 at an $8.00 per pound market price. The uranium reserves of North Dakota represent far less than 1 percent of the total U.S. reserves.

In recent years, the uranium deposits of North Dakota have been investigated as potential health hazards rather than as potential mineable commodities. Concern has been expressed for human or livestock consumption of moderate to high levels of uranium in groundwater in some areas of southwestern North Dakota. Elevated radon levels near these deposits is also a concern. These mines operated without any reclamation laws and the open pits were left when the sites were abandoned. In the 1980's and early 1990's, the North Dakota Public Service Commission reclaimed these sites for health reasons by burying the most radioactive material in the bottom of the pits and leveling the surface. Studies have also been conducted by the Department of Energy into the spread and potential health risks of radioactive dust that spread from the uraniferous lignite burn sites, both at the mines and the Belfield and Bowman kiln sites. 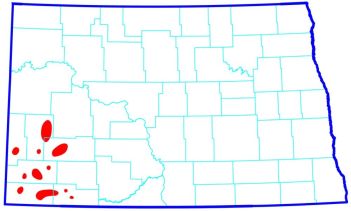 Known areas of uranium occurrence within 200 feet of the surface in western North Dakota. This information was plotted from radioactive spikes on gamma logs on file with the North Dakota Geological Survey.


Conglomerates, sandstone, and bentonite of the Chadron Formation in the Chalky Buttes, Slope County. Geologists speculate that these volcanic-rich rocks were the source for the uranium found concentrated in the underlying strata. Alteration of the glass shards to clay is thought to be responsible for releasing uranium to groundwater which leached the radioactive elements into the underlying rocks.
(Photo by E. Murphy, NDGS).


A portion of the old Fritz uraniferous mine located southwest of Belfield in Slope County. The photograph was taken in 1991, shortly before the mine site was reclaimed by the North Dakota Public Service Commission. Water with a low pH and high uranium content has ponded at the base of one of the mine pits.
(Photo by E. Murphy, NDGS).